Fans of the popular books and television series will find themselves very much at home in this part of the Highlanders.  The "Old Fox", Simon, Lord Lovat, was born near Druimorrin and there is a mysterious Fraser burial here.

We are happy to supply guests with a list of locations which appear in the books and can be identified as real  places you can visit in the area.

While the television series treats viewers to a kaleidoscope tour of some of Scotland’s most scenic locations, Diana Gabaldon’s original first novel is more restricted in its geographical scope and much of the action can be interpreted as revolving around the Muir of Ord area and its environs.

Gabaldon does attempt to give the whole story an air of authenticity by broadly tying it in to the Highland landscape.  Her vision, though, is obviously an American’s fantasy version of the Scottish Highlands.

The first novel opens in Inverness.  Later in the narrative, real-life locations, such as Fort William and Beauly, make an appearance, in amongst the imaginary, even though the distances between places are often unfeasibly expansive compared with the north of Scotland with which we are familiar.

Diana Gabaldon acknowledged the role of this area when she came to speak to 200 enthusiasts at the Phipps Hall in May.  The event was something of a coup for William and Helen Crawford, to mark the opening of the Old School’s new book and stationery department. 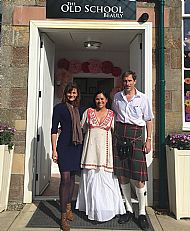 Helen’s familiarity with the novels inspired their brainwave.  “I asked Diana if she would come and open our new book department, followed by a book signing because I know that she has a close connection with this area. Our shop and grounds are immediately adjacent to The Beauly Priory which is where Claire Randall, a principal Outlander character, meets the seer Maisri.”

After the initial contact, the writer suggested expanding on the idea.  “Diana said she would love to come and that she had always wondered if she would manage to get back to Beauly. She also offered to do a Talk,” Helen explained.

Once word got out, the Crawfords began to realise quite how popular the event was likely to be.  “Initially, we thought we would hold the Talk in the new Book Department but this would have limited us to 30 seats. When we put the tickets on sale, the first enquiry was from a fan who wanted to buy all 30 tickets! We quickly decided to move the Talk to The Phipps Hall in Beauly so we were able to accommodate 200 people.  After the Talk we whisked Diana back to the Shop where she signed books for three solid hours. The queue was from the entrance to our book Department right the way up to The Square in Beauly which was quite a sight to see! We had people enquire about tickets from around the world and our Facebook Page and Website were inundated. At one point we put up a little video of us doing research - reading Outlander - and it went worldwide with views.”

During the Talk, the authoress revealed that she had found her inspiration in the character of Jamie McCrimmon, Dr Who companion and celebrated kilt-wearer.  She looked at him and thought, “That’s rather fetching!”  She told the Beauly audience, “A man in a kilt is a very powerful and compelling image.  What is the appeal of a man in a kilt?  I suppose it’s the idea that you could be up against a wall with him in a minute.”

Having decided upon the character of Jamie, she then had to pick a setting and went for an historical backdrop, explaining “It seems easier to look things up than make things up.”

Heroine Claire Randall begins her whirlwind escapade at a fictional hill on the outskirts of Inverness, implausibly spelled “Craigh na Dun”, sounding suspiciously similar to Craig Dunain.  The real-life Craig Dunain is sadly lacking in standing stones, despite having the remains of a chambered cairn (which some fans of the books reckon is close enough!) and a Pictish vitrified fort right next door on Craig Phadraig.  Desperate to visit the sites of the narrative, eager fans have suggested the stone circle could be at Clava Cairns, but Gabaldon laughs this off, explaining that she envisaged a hill and a complete absence of cairn monuments.  In the second book of the series, the characters actually visit both Clava Cairns and Craigh na Dun.  She says the standing stones of her imagination most closely resemble those at Callanish on Lewis.  In the novels, the characters describe Craigh na Dun as a fairy hill.  This doesn’t come from the name, which if it means anything, means Fort Hill, but “fairy hill” is a derivation for Tomnachurich.  Plenty of stones there, as it's the main cemetery for Inverness, but the wrong kind to set Claire Randall on her voyage into the past.

After riding around unspecified Highland terrain, our heroine and her companions arrive at “Castle Leoch”, seat of the MacKenzies, and finds intrigue in the shape of Jacobite sympathisers there.  It would be a perfect twin to Castle Leod (pronounced "loud") at Strathpeffer, seat of the MacKenzies and hotbed of Jacobite support if heroine Claire hadn’t mentioned she visited the castle in 1946, when she found it a ruin.  Castle Leod to this day is kept in good repair by the resident MacKenzie family, but is otherwise a good real-life equivalent.

Gabaldon claims in the Outlander Companion that she had never even heard of Castle Leod until "I happened to go to a Highland Games in California.  A couple came up to me [from] the local Clan MacKenzie Society … and showed me the photographs in their scrapbook – taken at the most recent Gathering of clan MacKenzie, in Scotland.  Among the scenes of Highland beauty and massed MacKenzies, were several photographs of the clan seat – Castle Leod.

Another key location in the first novel of the series is Jamie Fraser’s home of Lallybroch, a settlement adjacent to a broch, in an area of good farming land, situated on an important route and “a handsome three-storey manor of harled white stone, windows outlined in the natural grey stone, a high slate roof with multiple chimneys, and several smaller whitewashed buildings clustered about it” located about 2 days’ ride from Beaufort Castle. The fictional property is specified as being on the border between MacKenzie clan lands and those of Clan Fraser.  At one point, the adventurers travel from Inverness to Lallybroch via Belladrum.

Lallybroch itself is a figment of Gabaldon’s imagination, but a close real-life equivalent exists at Ord House.  The book’s description of the house is strikingly similar, farmland round about is productive and it was certainly built at the right time.  The National Library of Scotland holds a map of the Highlands drawn up in the 1740s which clearly shows the border between MacKenzie and Fraser country as following the line of the River Orrin, past its confluence with the Conon as far as Conan Mains, before cutting down south-east to the shore of the Beauly Firth by Tarradale House, putting Ord House on land that could well have been disputed from time to time.

Owner Eliza Allen has noticed an increase in trade from Outlander fans.  “I did know that people equate Ord House with Lallybroch as we have a lot of Americans who are doing Outlander tours come here for tea. There are various tour guides who bring them here and then give them a talk about weapons or tartans or battles etc - they are very good and make it entertaining. This goes on about 3 or 4 times a week during the summer!”

Hugh Allinson, of Inverness Tours, recognised the parallels between Ord House and Gabaldon’s imagined setting.  He explained, “I chose Ord House nearly a decade ago, as part of our Classic one-day Outlander Tour.  It hits many necessary criteria - being a very close parallel.  While it is not a Fraser House, it is a Mackenzie House, which is almost as appropriate to the tale. These facts all make it perfect for purpose.  I must stress - I am talking about book-location Lallybroch, not TV series-location Lallybroch.”

Eliza herself appreciates why the tourists enjoy their guide’s presentations.  “They all do different talks with it; one of them’s brilliant,” she describes.  “He shows them how to make a kilt.  He’s got a huge bit of plaid and he’s down on his hands and knees and he’s brilliant at it.  Obviously, he’s done it so many times.”

Correspondingly, Hugh understands why his clients relish their visits to Ord House, “The guests I bring there enjoy great hospitality, and a weapons presentation of 1700's hardware! They invariably comment about what a good choice Ord House is for Lallybroch, and how much they enjoy their afternoon tea there.”

It would be a tardy horse indeed that would take 2 days to reach Ord House from Beaufort Castle, but no one location in Scotland could satisfy all the features required of Lallybroch.  Apart from anything else, brochs are typically found near the coast in the north and north-west of Scotland, with the remains of one possible example near Struy (on Chisholm clan land, surrounded by Fraser country) and an impressive broch survival at Glenelg (MacLeod country, but close to the border with MacKenzie-held Kintail) which must surely be the type of ruin Gabaldon had in mind for her Broch Tuarach at Lallybroch.

Her re-imagining of the Highland landscape has proved immensely popular, both at home and abroad with terrestrial television in Britain showing the series, too.  The level of interest generated by the event at the Old School meant that Helen and William were able to achieve even more than they at first had hoped.  “We donated all of the proceeds from the Talk to The Highland Hospice, a charity very dear to our hearts,” explained Helen.  “One thing I would say is that Diana herself has a special talent to make connections with her fans in a very personal way. She is incredibly generous with her time and helped us raise a lot of money for our charity.”