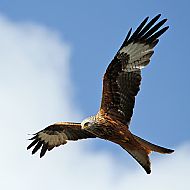 Lockdown has meant that the wildlife has enjoyed Druimorrin largely undisturbed.  The hares have been surprise by the occasional dog-walkers, though.

We sometimes get other birds of prey, like kestrels and buzzards, but they don't seem to be scaring off the hares, which happily play on the grass and among the bushes and trees at Druimorrin.

In the last couple of years, we have had a surprising number of hares here and while the guinea fowl which stroll around Druimorrin do have an air of owning the place, the actually belong to our neighbour, the gillie.

We do occasionally see grouse and partridges, more in the Autumn than the Summer, and umpteen little birds, including sparrows, robins, tits, wagtails, finches, thrushes and blackbirds.

Red deer have been seen at Druimorrin, but only rarely. However, they are more frequently seen across the bridge where there is a track down the other side of the Orrin which takes you along the wooded banks to where the Orrin and the Conon meet.

Recently, we have seen a few roe deer at Druimorrin and, in fact, my younger daughter was scrutinised by a couple of roe deer as she sat reading a book under a tree.  She's good at staying still and they came very close to check her out.

The fields on the other side of the track are full of geese in Winter, but in Summer you are more likely to see hares speeding across there.

A short drive away is Munlochy Bay, a well-known twitchers' rendezvous. There is a car park and picnic spot just off the main road there overlooking the bay and a hide. The bay is protected as one of Scotland's important bird sanctuaries.

Watch out for red squirrels in the area, too.  The woods you drive through on your way from Druimorrin to Muir of Ord are a good place to spot them - careful they aren't crossing the road as you drive past!  The red squirrels in the Torrachilty Woods at Contin and up in Fairburn seem to be shyer, but you can spot the tell-tale nibbled pine cones easily enough.

To see dolphins, seals, whales or other sealife you have to take a drive into Inverness or over to the Black Isle, about 30 minutes or less on the road. Dolphin Trips Avoch also runs boat trips when you can lower pots to catch langoustine (big prawns like crayfish) on your way out and lift them on the way back in. You get to keep what you catch.

A little further along the Black Isle coast is Chanory Point where there is a stony beach, a good vantage point from which to see the dolphins play. This is the spot where Bill Oddie and his camera crew failed to see a single dolphin, but did encounter an otter feeding on the beach.  The trick is to time your visit to co-incide with the changing tide.

There is another company which runs sealife boat trips right at the further end of the Black Isle, in Cromarty.